Since Jan 24th 1872 in which the Emperor Meiji had first eaten Beef to give an incentive for its prevalence, eating beef has gained popularity in Japan. Then [Imaasa] opened and located in very the entrance of Tokyo. In the same year, the first railway opened between Shiodome, Shimbashi and Sakuragi-cho, Yokohama.

Even in 1880, in which [Imaasa] started, the Japanese national anthem 'Kimigayo' was composed by Hiromori Hayashi, a National museum was build in Ueno. And the plan for extension of horse-drawn streetcar's line to Asakusa and Ueno had been approved.

Also the shop of Zoni and Shiruko, a kind of soup, was in fashion in Tokyo. When Benjamin Disraeli, a British statesman and novelist has resigned for referendum in the U.K. In the meantime, France colonized Tahiti and Guy de Maupassant become a star by his short literary work "Ball of Fat". In Austria, Johannes Brahms(1833-1897) composed "Academic Festival Overture". America was about to go into Gold Rush.

Though beef had been eaten mostly only in a hot pot with Miso paste for cleaning away its odor at that time,
[Imaasa] have been served it with Warishita Soy Sauce since opening. We served chicken as well as beef at that time.

Semi‐Western cooking come to be popularized including Gyunabe (beef in a hot pot). The second owner was Katsu-saburo, who opened new Western style restaurant [IMAASA] in 1922 right in front of Shimbasi Sta. In March of the next year, [Imaasa] turned into a stock company named "Imaasa Trade Ltd.". It was also this year that we experienced Kanto Great Kanto earthquake. [Imaasa] rebuilt head office building with reinforced concrete in the wake of disaster.

When Sukiyaki-Don, Oyako-Don, Ten-Don got popularity for its easiness in Kanto area, Sukiyaki was introduced from Kansai. Then Gyunabe made of only beef and welsh onion was enriched with adding tofu, shitake mushroom, shirataki etc. The way of eating it with dipping into egg was invented not to scald the tongue. Gyunabe restaurants then changed its name into Sukiyaki around this time.

Katsu-saburo challenged the new way for advertising. For example, he sent out for his restaurant to geisha houses and donate a garden lantern to shrines. 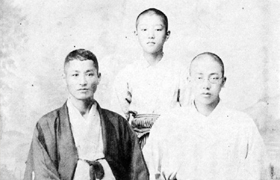 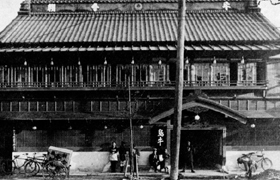 In 1930, Asahiro became the third owner of [Imaasa]. In the beginning of Showa era, about 50 or 60 maidservants had served in [Imaasa] divided into 4 group. The building was reformed to Momoyama style a classical Japanese style in 1938. [Imaasa] was then at its peak.

However [Imaasa] was suffered from governmental control for food owing to World War II. Even rationing has halted in Mach 1st 1944, which caused our closing down. Though the building survived many bombardment through the end of war, it has destructed not to spread fire and become nothing.

When we came back to Tokyo, we met an illegal occupation of a half of our land. We also saw the black market in front of Shimbashi; it was the era of confusion. At end of court battles, we have got back full of our land in 1957.

Japan experienced Tokyo Olympic in 1964. At the same year, we built 9 storied reinforced concrete building still there were no building as high as it. Following the redevelopment in front of Shimbashi station, [Imaasa] reopened in another building there. The owner was then the 4th, Shirou. Though [Imaasa] was Shukiyaki restaurant, it started to serve shabu-shabu and Shinryo Zukuri (Cold Shabu-Shabu). And [Imaasa] responded to demand for office workers' reception caused by rapid economic growth.

Among Japanese black, we have kept serving Choice Matsusaka Beef and Zaku vegetables. By joining Japan Restaurant Association, many foreigners visit us. We even have received a call from cop for interpretation help.

Commemorating a century's history and business expansion, [Imaasa] moved back to current location in 1980. 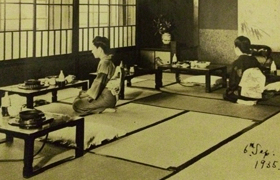 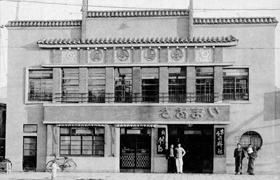 Since 2007, the 5th and current owner Akira have managed the restaurant. He's a sommelier so he challenged marriage of sukiyaki and wine. We joined an association called "Sukiya-ren"; place for restaurant owners and lovers of sukiyaki around Japan. Now [Imaasa] is still discovering a new style for enjoyng sukiyaki. 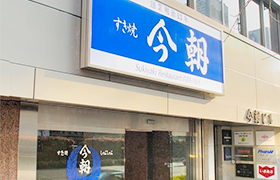